If you bought the Bundle for Racial Justice and Equality, you already own this game!

"I want translations with copious footnotes, footnotes reaching up like skyscrapers to the top of this or that page so as to leave only the gleam of one textual line between commentary and eternity." - Vladimir Nabokov, author of Lolita and Pale Fire

This is a game about a Writer and a Translator who have every reason to be the dearest of friends or most vicious of enemies. Writer left their home1 under great duress, bound for a foreign land; Translator, out of pity and admiration, supported them2 in their time of need. Now, Writer is working on their grand magnum opus3; Translator is appending their lines with footnotes to relay its deeper meanings… or so they think.

The two are set on an inevitable collision course:

Like Skyscrapers Blotting Out The Sun is a 2-player game of friendship, disagreement, reconciliation, and, above all, writing (and the footnotes that define what's written). Be careful what you wish for, Nabokov.

1, “left their home”, the introduction is a fictionalisation of the author Vladimir Nabokov’s complex emigration from Russia to the U.S.A. from 1917 to 1940.

2, “supported them”, referring to the U.S. literary critic Edmund “Bunny” Wilson, who became fast friends with Nabokov and helped him find work.

4, “jocular embrace”, referring to an entry in Nabokov’s dream journal after his and Wilson’s bitter falling-out over his translation of Pushkin’s Eugene Onegin: “somebody on the stairs behind me takes me by the elbows. E. W. Jocular reconciliation.”

5, “battle lines”, a double meaning referring to lines of text as well as military formations.

Like Skyscrapers is a two page, two-player concept rpg that goes harder into footnotes than probably any other game I've seen.

I'd be tempted to say it's more a thing to be read than played, but it's genuinely playable. You take on the roles of a writer and a translator, and the translator has the power to re-contextualize everything the writer writes.

There's several optional ways to play, plus extensive footnotes, but the game itself largely fits on one page.

Overall, if you enjoy clever writing, or you like writing games, I'd strongly recommend this one. It feels a bit academic at first glance, but there's a distinct, almost duel-like feeling to going back and forth with your translator over whether you actually meant what you meant. 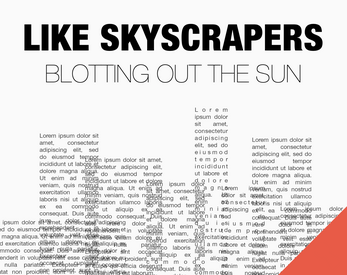 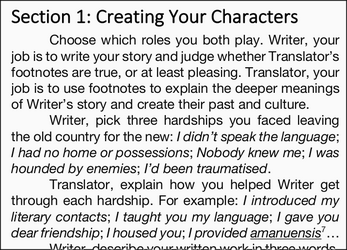 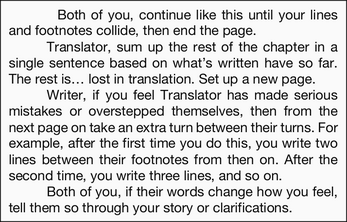 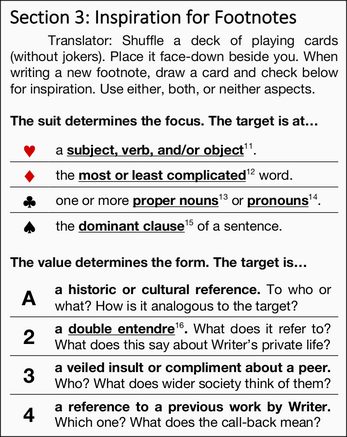