The Analog Digits Font Pack is a set of layer fonts imitating Nixie tubes, Nimo tubes, and VFD 7-segment displays! The fonts in the pack are:

Each font comes in .otf, .woff, and .woff2 formats. The pack also comes with a user guide (.pdf and .txt) providing information about the fonts, how to use them, and a little bit about the technologies they're based on.

What are layer fonts?

Layer fonts are fonts with different 'layers' that you overlap to make a more detailed image. For example, reNix comes with 4 main layers: the filaments in front of the lit filament, the lit filament itself, the filaments behind the lit filament, and the outline of the glass tube. By changing the colours of the different layers, and applying effects like glow, blur, or shadow, you can quickly and easily make Nixie tube, Nimo tube, and 7-segment display graphics!

What's in these fonts?

Each font is geared towards numbers (that's why this is the Analog Digits Font Pack). They all have regular numerals and a few other pieces of punctuation and maths symbols. fluoWrite also has VCR symbols like PLAY, REWIND, and TAPE, and reNix has scientific units like Roentgen (R) and Hertz (Hz) and scales from nano- to giga-, based on and inspired by real historical Nixie tube designs.

These fonts are not full-text fonts.

Each font also has a bunch of OpenType features that let you customise how they look!

Once you buy the font pack you can freely use the fonts in personal and commercial projects, and edit the font files, as long as you don't redistribute (commercially or freely) the original or edited font files in themselves.

Credit and/or a link to this page are much appreciated, but not necessary.

The demo version can be downloaded for free and used in non-commercial projects only.

Here are some of the other typefaces I've made—find more details on their itch pages, and more fonts and other tools and assets in my Tools and Guides collection!

In order to download this font pack you must purchase it at or above the minimum price of $4.50 USD. You will get access to the following files: 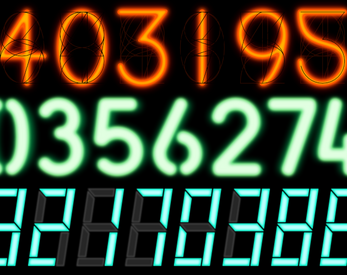